Know the Signs of Parkinson’s Disease 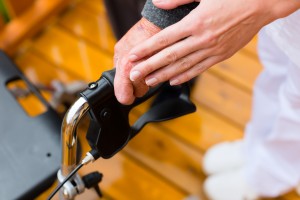 Parkinson’s disease is a neurodegenerative brain disorder that progresses slowly in most people. This chronic progressive disease is linked to decreased dopamine production in an area of the brain known as the substantia nigra, affecting the neurons that control movement. Parkinson’s disease sets in when the neurons begin to die and the levels of dopamine in the brain decrease. As the levels of dopamine lowers a person has less and less ability to control their movements, body and emotions.

Use this guide to help you take note of any symptoms you might recognize so that you can discuss them with your healthcare provider. Often symptoms begin on one side of the body and usually remain worse on that side, even after symptoms begin to affect both sides.

Secondary Symptoms of Parkinson’s Disease may include:

Parkinson’s disease itself is not fatal, but complications from the disease can be serious and the symptoms can make everyday activities extremely challenging. And while there is currently no cure, recognizing the signs of PD early on and getting proper home care can help keep an individual’s quality of life as high as possible through medications and other treatments.

According to the National Institutes of Health (NIH), Parkinson’s disease affects as many as 500, 000 people in the United States.  Getting medical attention early is important to slow the progression, if you or someone you know begins to exhibit any of the signs of Parkinson’s disease, consult your doctor.

Welcome Your training at Nurse Builders Academy will be comprehensive. Your decision to study in Healthcare fields will enhance your marketability and future professional potential.The Healthcare fields open the door to a world full of challenge, excitement and new experiences. Thank you for the opportunity to present... See full profile