Every day scammers are finding new. inventive ways to gain your financial information and access your assets. Most recently scammers are impersonating delivery services claiming to have a package requiring identification and the scan of a credit card for delivery. Here’s the personal account of a San Diego resident that fell prey to such a scam. 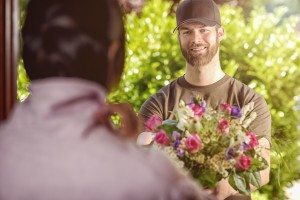 “In early December, I had a phone call from someone saying that he was from some outfit called: “Express Couriers,”(The name could be any courier company) He asked if I was going to be home because there was a package for me that required a signature.

The caller said that the delivery would arrive at my home in roughly an hour. Sure enough, about an hour later, a uniformed delivery man turned up with a beautiful basket of flowers and a bottle of wine. I was very surprised since there was no special occasion or holiday, and I certainly didn’t expect anything like it.

Intrigued, I inquire as to who the sender was. The courier replied, “I don’t know, I’m only delivering the package.” Apparently, a card was being sent separately… (the card has never arrived!) There was also a consignment note with the gift. He then went on to explain that because the gift contained alcohol, there was a $3.50 “delivery / verification charge,” providing proof that he had actually delivered the package to an adult (of legal drinking age), and not just left it on the doorstep where it could be stolen or taken by anyone, especially a minor.

This sounded logical and I offered to pay him cash. He then said that the delivery company required payment to be by credit or debit card only, so that everything is properly accounted for, and this would help in keeping a legal record of the transaction. He added, couriers don’t carry cash to avoid loss or likely targets for robbery.

My husband, who by this time was standing beside me, pulled out his credit card, and ‘John,’ the “delivery man,” asked him to swipe the card on a small mobile card machine with a small screen and keypad. Frank, my husband, was asked to enter his PIN number and a receipt was printed out. He was given a copy of the transaction. The guy said everything was in order, and wished us good day.

To our horrible surprise, between Thursday and the following Monday, $4,000 had been charged/withdrawn from our credit/debit account at various ATM machines. Apparently the “mobile credit card machine,” which the deliveryman now had all the info necessary to create a “dummy” card with all our card details including the PIN number. Upon finding out about the illegal transactions on our card, we immediately notified the bank which issued us a new card, and our credit / debit account was closed. We also went to the Police, where it was confirmed that it is definitely a scam because several households had been similarly hit.”

When being contacted by a delivery service you don’t recognize, be sure to follow up with a verification that this is an actual business with a verifiable delivery for you from a known source.  Also, while providing identification to verify your identity may be necessary in some cases, you should never have to provide a credit card or financial information to a delivery driver.

This is simply one way thieves have victimized the unsuspecting by appearing to be a legitimate service provider.  There are countless other scams and methods so it pays to be wary.  Educate yourself on red flags to be protect your assets and family with online resources such as the Federal Trade Commission’s Scam Alerts page.

Selecting a home care provider for a loved one can be an emotional and complex decision. At Caring Hands Home Care we understand this and are ready to help you in any way possible. Whether you are considering home care options for someone with dementia,... See full profile